South Korea’s Kakao Group has announced a major overhaul to improve its governance and address its social responsibility, succumbing to escalating pressure from regulators and politicians on the online platform giant.

The overhaul, announced on Tuesday, includes restructuring the group’s businesses to focus on innovative areas and refrain from expansion that could hurt the local economy; creating a 300 billion won ($256 million) fund for the next five years to support its smaller business partners; and strengthening K Cube Holdings’ commitment to social responsibility.

The most notable about the group’s plans are changes to K Cube Holdings, Kakao’s de facto holding company. 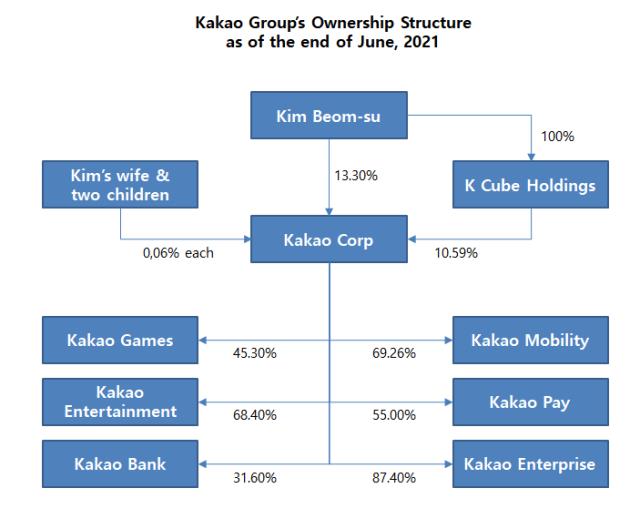 K Cube Holdings has only seven employees, with more than half of them consisting of Kim’s family members including his wife and two children. They will leave the company as part of the revamp.

K Cube Holdings’ role in the group has not been clear so far. The company, established in 2007, only started to generate revenues in 2018 through dividends and gains from small venture capital investments.

But in the future, K Cube Holdings will likely shift its focus to socially responsible investing beyond venture capital investments as Kakao Group pledged it would transform K Cube Holdings into a company that creates social value.

There is also a possibility that K Cube Holdings could manage the group’s 300 billion won fund designed to support its business partners. Kakao’s affiliates are expected to put a combined about 60 billion won into the fund over the next five years, which represents approximately 13% of Kakao Corp’s consolidated operating profit of 456 billion won in 2020.

“K Cube Holdings will be transformed into a company that prioritizes social value over financial returns, although details have yet to be finalized,” said an official at Kakao Group. “Chairman Kim’s family members will leave the company.” (Reporting by Seul-gi Kim)
< 저작권자 ⓒ 자본시장 미디어 'thebell', 무단 전재 및 재배포 금지 >